Meet Mr. Willie
Jun 3 2019
Share to FacebookShare to TwitterShare to Google+Share to LinkedInShare to PinterestShare to EmailPrint this page 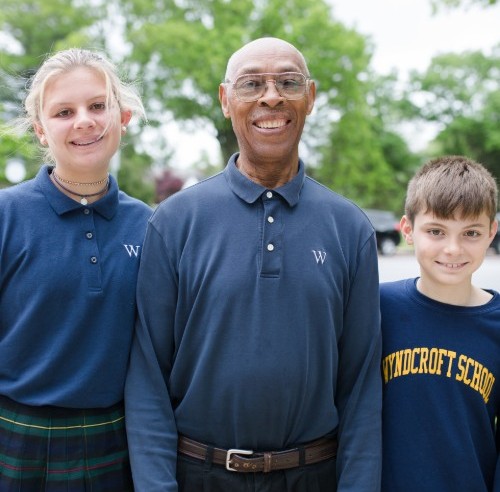 Willie Thorpe, known as Mr. Willie, has been a part of the Wyndcroft community for 55 years. This year, at the young age of 87, Mr. Willie is retiring from his time at our school. Two student reporters, Carly and Johnny Mullaney, took some time to sit down with Mr. Willie and reflect on his tenure. Here's what they learned.

Mr. Willie was born October 10, 1931 outside Durham, North Carolina. He had 10 siblings and he was the oldest of them. At a young age he started working on a farm growing corn and tobacco.

At 14, he lost his father and he became the man of the house. The farm owner then became a father-like figure for him. He taught him how to do many things and even helped him get his driver's license. Mr. Willie then moved to Pottstown, PA where he married Mrs. Willie in 1963. They have four children Marla, Willie, Joe and, Tami.

We have Mrs. Willie to thank for seeing the ad in the paper for a job at Wyndcroft. This job was a perfect fit for Mr. Willie. In 1964, he interviewed with and then started working for Mr. Carlisle Snively, who was the Headmaster at the time. His starting salary was $2 per hour. At this time, Wyndcroft had 152 students with up to 13 students per grade in much smaller buildings. There were 13 teachers, a couple of whom were part time.

Since then, he has seen our school grow for over 50 years. The footprint of the school has also changed. With the many additions, renovations of the classrooms and the gymnasium. Mr. Willie feels his biggest accomplishment at the school was helping put in the A-frame to stop the leaks from the mid-80's addition (now the area around the music room).

Mr. Willie has certainly helped shape Wyndcroft into what it is today and we cannot thank him enough for his help throughout the years.

When he retires he said he has many things planned. But, he is most excited to see his 7 grandchildren and his one great grandchild.

The Wyndcroft School is establishing The Mr. Willie Thorpe Good Citizenship Award in celebration of Mr. Willie's 55 years of faithful service and dedication. Each year at graduation, one eighth grade student will be chosen to receive this award. The first award will be given at the 2019 Honors Day Awards Ceremony.

Fun Facts that you may not know about Mr. Willie: